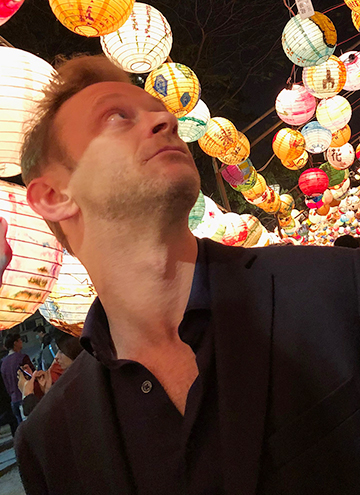 Prof. Geoffrey Alan Rhodes is a pioneer of new cinema forms.  His career began in music production, then film making and multi-screen installations.  Since 2005, he has been producing award winning projects in Augmented and Virtual Reality and writing and performing on the subject of new media technology and its relationship to cinema and object-based museums.  He has been awarded production grants by the Princess Grace Foundation, the National Endowment for the Arts, the National Endowment for the Humanities, and many others.  His films and media installations have screened and exhibited across the Americas, Europe, Central and Eastern Asia, including features in the Tribeca, Sarajevo, and Moscow film festivals, and featured exhibition in the International Society for Electronic Arts, and the European Media Arts Festival.  He is a creator of the Chicago 00 Project, an award winning series of virtual reality publications with the Chicago History Museum.

Prof. Rhodes received Bachelors of Arts from the University of Washington and the Evergreen State College, a Master of Fine Arts in the Department of Media Study at the State University of New York at Buffalo where he studied under Prof. Tony Conrad, and conducted PhD research at York University’s Dept. Communication and Culture where he helped found the Future Cinema Lab under Professors Caitlin Fisher and Janine Marchessault.  Before joining the ICCI, Rhodes served as an Assistant Professor in the School of Film and Animation at Rochester Institute of Technology, and a tenured Associate Professor, and department Chair, of Visual Communication Design, at the School of the Art Institute of Chicago.