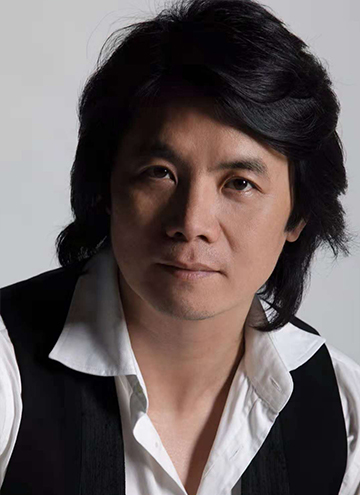 Sherwood Hu, "one of the most exciting and dynamic directors that emerge from China" (Kirt Honycutt, Hollywood Reporter). Born and raised in Shanghai in a creative and artistic family, Sherwood relocated to the US to study his Masters of Arts degree in New York State University and earned a Ph.D. in directing from the University of Hawaii at Manoa. He also studied at The Public Theater in New York under Joseph Papp, and began his professional career directing in theatre, including productions of Rashomon, Constant Prince and The Chairman's Wife.He also acted in the lead role of Song Liling in several productions of David Henry Hwang's M. Butterfly.

Hu created The Legend of Prince Lanling, a lavish stage production set in ancient China; this received an Honorable Mention Award from the Kennedy Arts Center. He later adapted this into his first feature film, the epic Warrior Lanling, which was launched in the 1995 Telluride Film Festival, San Sebastian Film Festival, Hawaii International Film Festival and others.

In 1998, Francis Ford Coppola and Wayne Wang were executive producers of his second feature, one of the first co-productions between American and China. Lani Loa - The Passage was a Hawaiian ghost story/cop movie/spiritual love story, shot in Shanghai and Hawaii, and starred Angus Macfadyen, Ray Bumatai and Chris Tashima. Tashima also starred in his next film, On The Roof (2002), a small indie DV ensemble piece filmed in Pasadena, California.

In 2003, Hu returned to China to direct a 40-episode television series, Purple Jade for China Central Television, and a 30-episode TV series "The War of Peking". He returned to epic costume period film with Prince of the Himalayas (2007), his own adaptation of Shakespeare's Hamlet, set in ancient Tibet, and performed entirely in the Tibetan language. The film received numerous awards including best picture, best director and best actor in several international film festivals.

Honored with the title of "Eastern Scholar" a distinguished professor. He was invited by Shanghai TV station Art and Culture channel hosting the only Film Critique program Hu on Silver Screen since 2009. And he was the artistic director of 2010 World Expo Shanghai Pavilion, which is one of the most popular pavilions in the Expo.

From 2018, Hu served as tenured professor at ICCI at SJTU where he supervises and mentors graduate and PhD students.