Local time Feb 5th, 2019 in New York, hosted by the Junior United Nations of Calligraphy and supported by the Shanghai Cultural Development Foundation, the Celebrating New Year and Writing Chinese Characters Activity was held at the United Nations International School. ZHOU Bin, Professor from ICCI, organized and participated in this event, which presented a rich Chinese culture feast for the students who were the children of the UN diplomats from various nationalities.  As one of the most influential and oldest cultures, Chinese characters are becoming more familiar to the international community. Chinese calligraphy, which is the artistic writing of Chinese characters, has gradually become the mainstream of oriental culture with its aesthetic expressions. 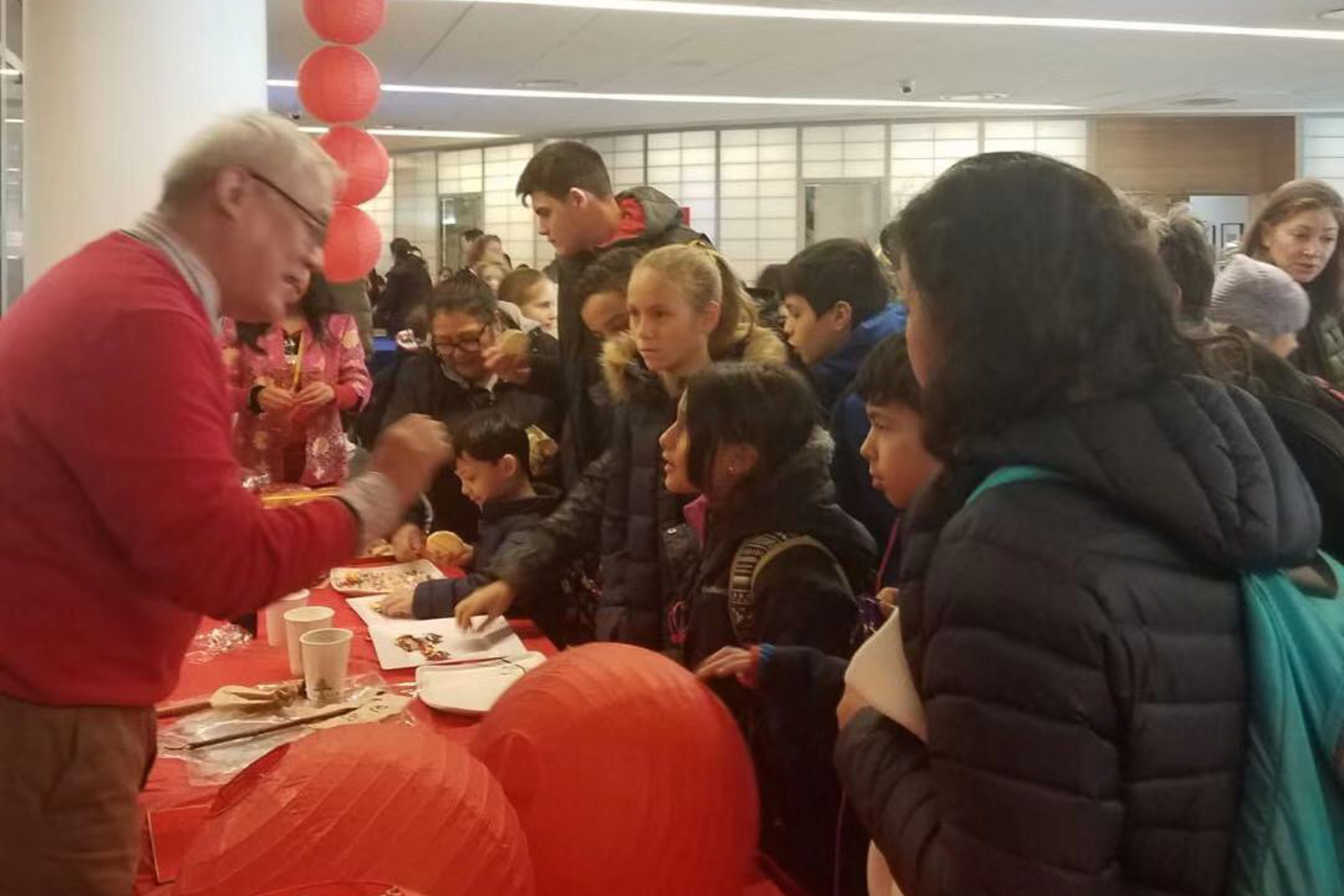 Prof. Bin ZHOU introduced Chinese calligraphy to the children of diplomats at the event

In 2014, under the advocacy and support of former UN Secretary-General Mr. Ban Ki-moon, the Junior United Nations of Calligraphy, a United Nations NGO program, was established at the United Nations International School. Founded by Prof. ZHOU Bin and inscribed by Secretary-General Ban Ki-moon, the organization dedicates to establish a bridge of communication for the diplomats and their children of the United Nations through calligraphy, whose beauty and artistic expressions can be shared beyond borders and ethnics, thus enhancing the friendship between the people of the world and promoting the peaceful development of the world. 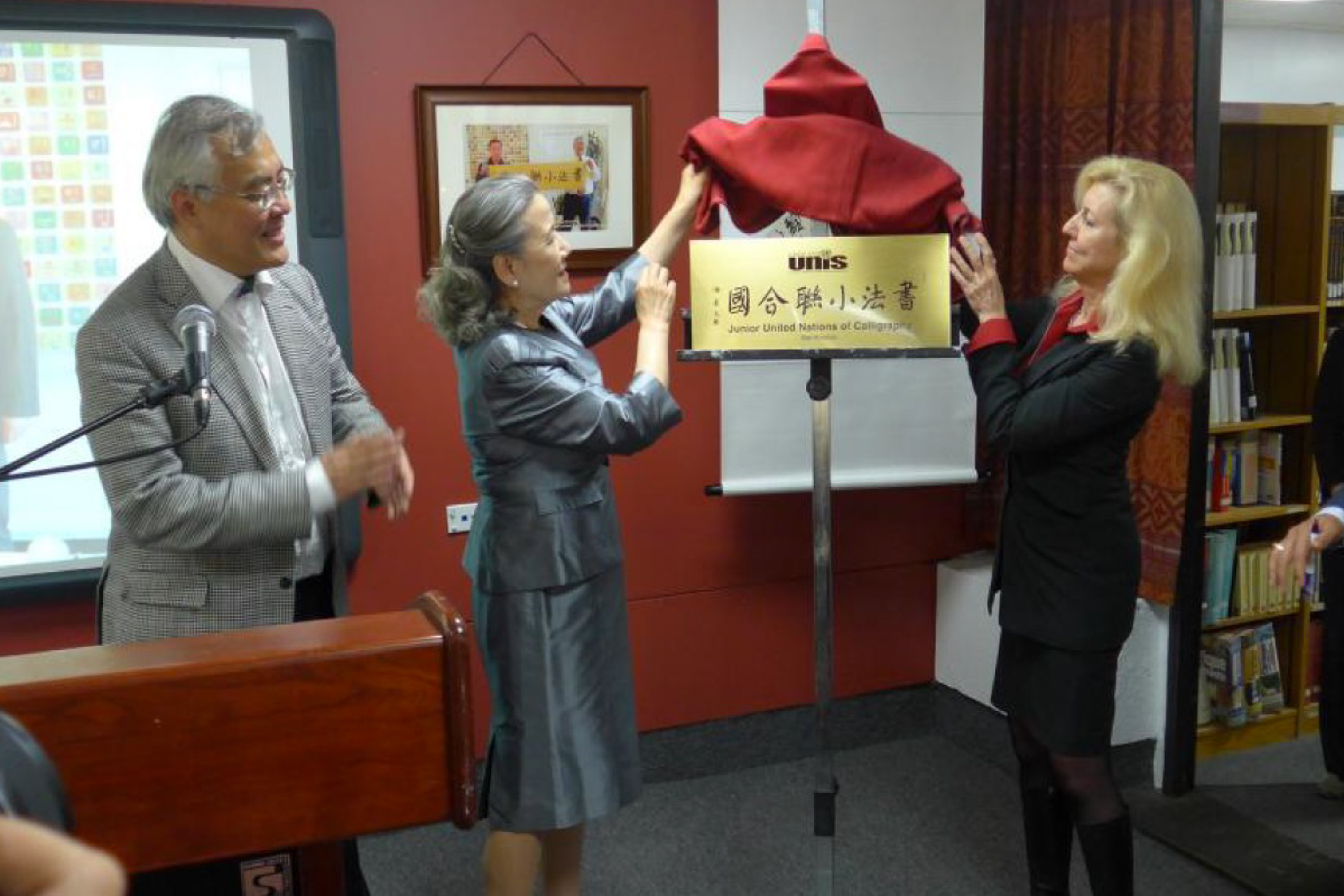 As the Lifetime Chairman of the Junior United Nations of Calligraphy, Prof. Bin ZHOU goes to New York every year to organize activities for students in his spare time . This Spring Festival is the time to recruit new members. Youth from more than 100 countries gathered together and practiced writing the  Chinese characters “春”(chun) and “福”(fu) with writing brushes. Prof. ZHOU Bin introduced the Chinese culture through calligraphy, which was a successful culture communication practice. On the spot, the exquisite "fu" calligraphy works by Roy Ye, Executive Chairman of "Junior United Nations of Calligraphy", spread the joy and attracted many Chinese calligraphy lovers. 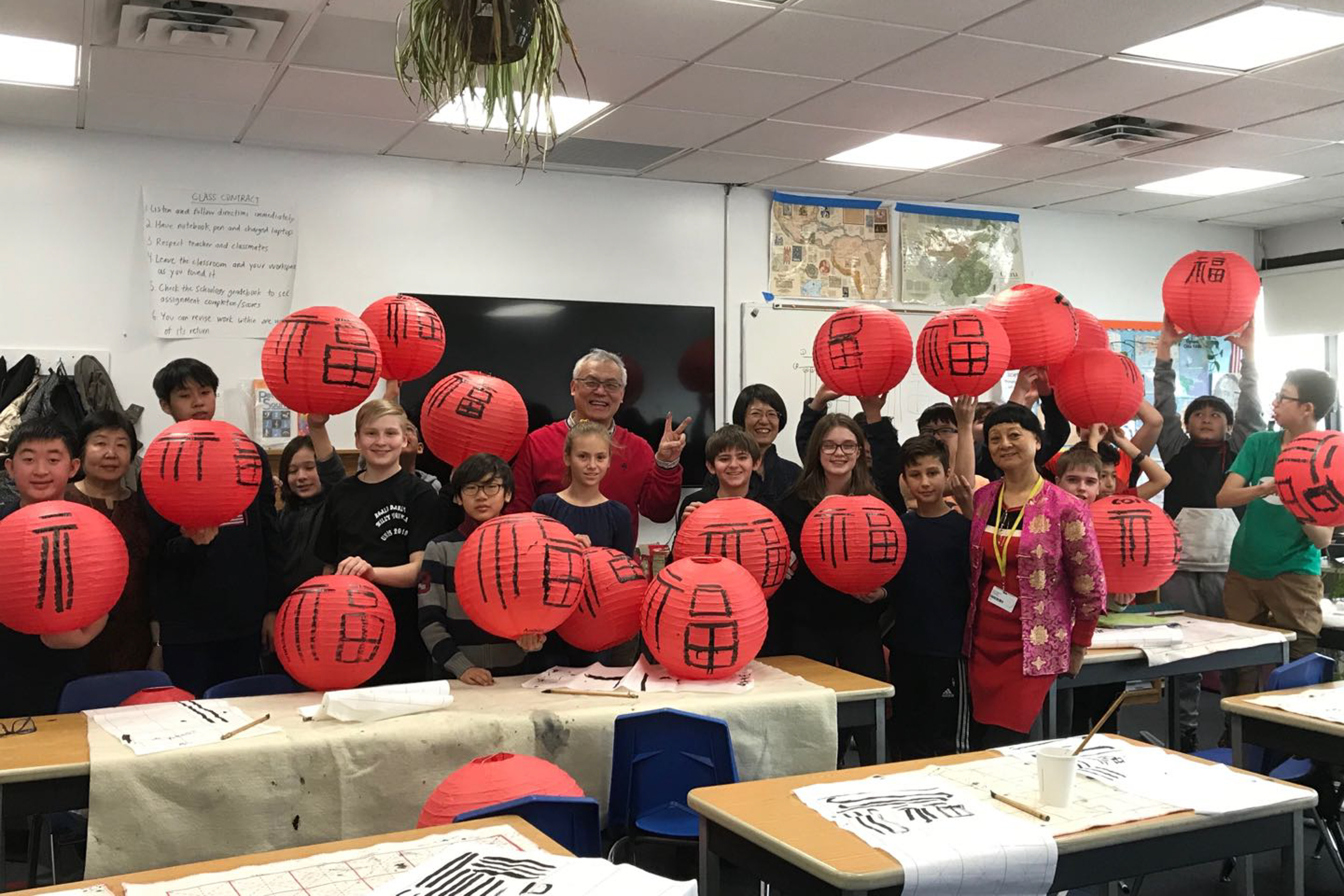 Celebrating the Chinese New Year by means of calligraphy has become a unique way for the United Nations International School to celebrate traditional Chinese festivals, which is also a meaningful attempt to share Chinese culture.

The United Nations International School is an international school for children of diplomats and United Nations officials from nearly 200 countries. More than 100 students from nearly 200 countries have been involved in Junior United Nations of Calligraphy, which has profound influence in international cultural exchanges in recent years. It acts as an platform, allowing the diplomats and their children to experience the charm of Chinese traditional culture through activities brimmed with Chinese elements. Those activities were well-received by ambassadors from various countries.

On the day of the activity, Prof. ZHOU Bin gave the students a lecture on Chinese culture with New Year's wishes in delightful atmosphere. Having been held for several years, the "World Peace Development and Calligraphy International Exchange – writing the character ''福" to welcome the Chinese New Year”, is a branded project of the United Nations International School. It brings a beautiful vison of loving and peace expressed by Chinese people through the way of cultural exchanges. 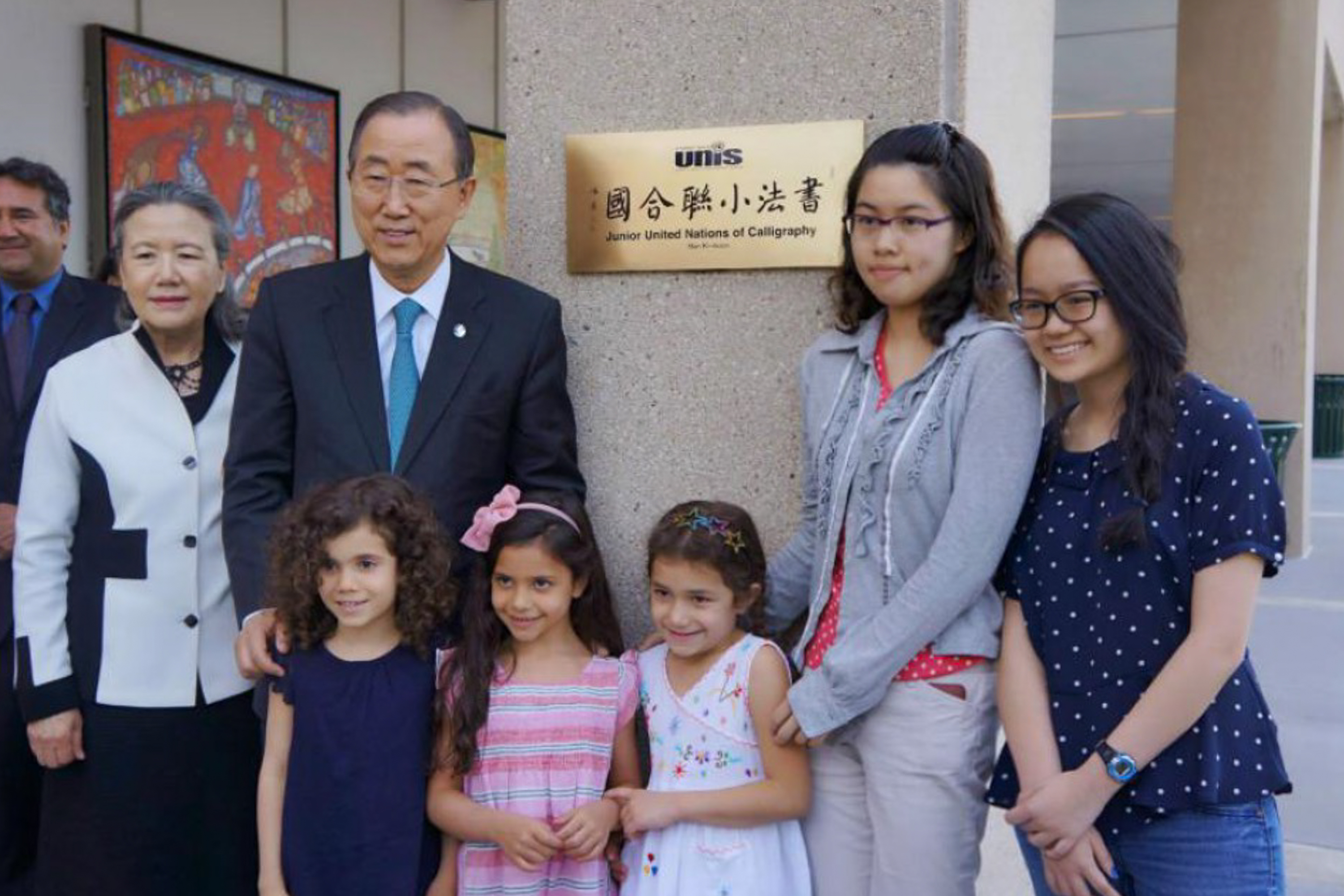 Ban Ki-moon, chairman of the Boao Forum for Asia, said: "It is meaningful to spread the Chinese calligraphy culture to young people. Prof. ZHOU Bin has been working hard on the significant international stage to spread Chinese culture and tell the story of China. In 2018, the four-volume textbook of Chinese Calligraphy Culture, "风调雨顺", written by Prof. Bin ZHOU, provided a perfect textbook for people around the world studying Chinese calligraphy and culture.” 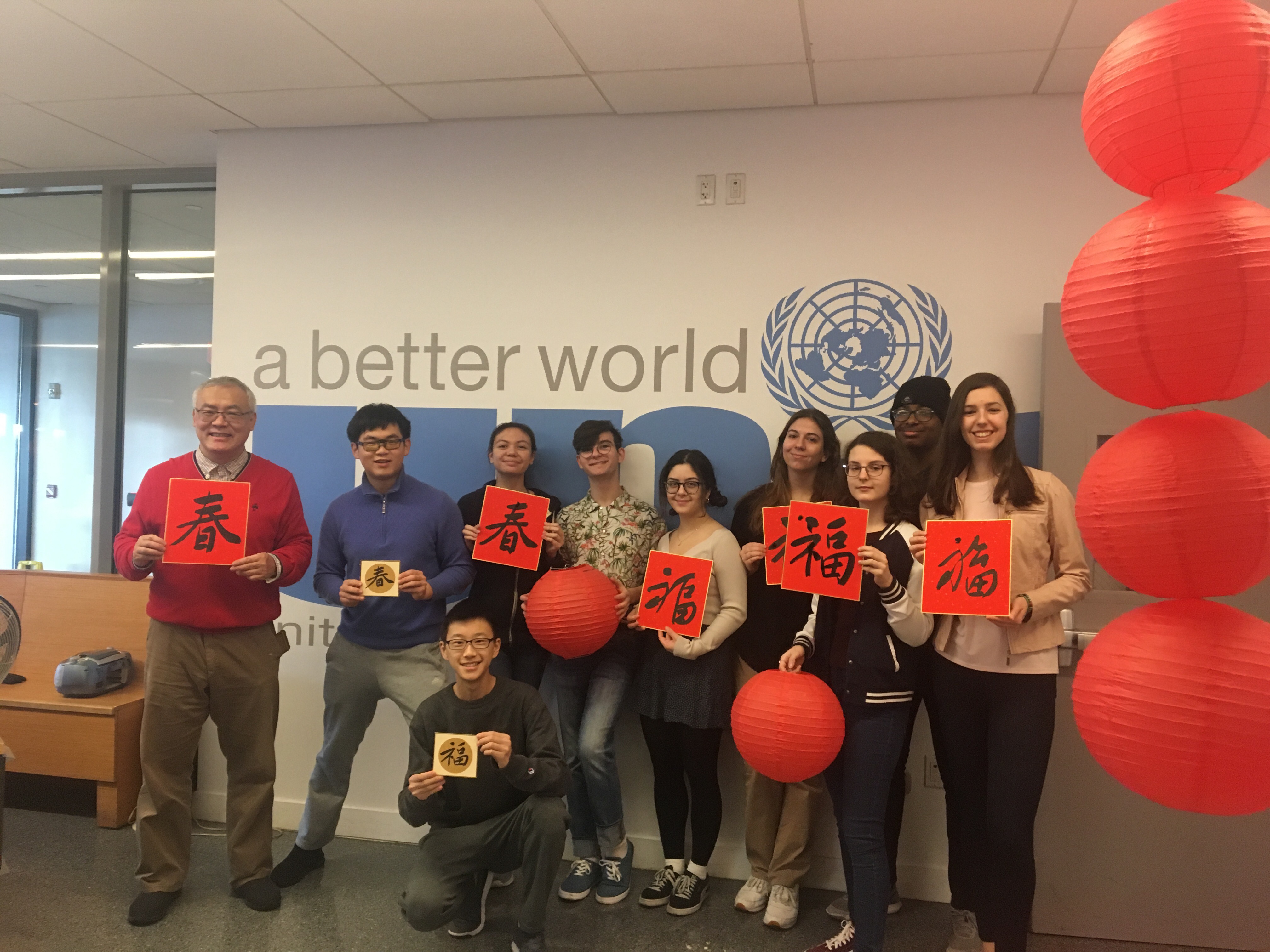 The international expression of Chinese cultural elements has always been the main theme of this series of activities. Over the years, Prof. Bin ZHOU has invited guests including Ana Larrea, the UN official from Spain, Arturo Guerrero, and American artist Lucas Perez to impart and spread Chinese calligraphy. By writing the Spring Festival couplets, making lanterns and writing Chinese characters "春" and "福" together, they expressed their personal understandings of Chinese festivals and customs in the form of traditional culture. In addition, the interactive calligraphy-teaching experience, which combined communications and emotions,  encouraged people of different nationalities to participate, experience and understand Chinese culture, and feel the charisma of calligraphy and Chinese culture as well. Based on extensive practice, Prof. ZHOU Bin has developed a creative path for spreading the art of calligraphy as well as Chinese culture.